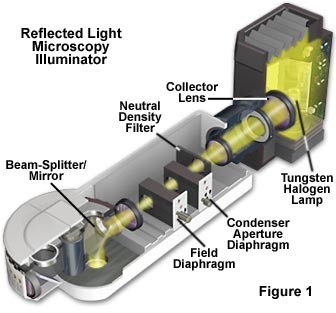 These diaphragms are in the opposite of their respective positions in transmitted light, the aperture diaphragm now being closer to the light source. Such illumination provides bright light evenly dispersed across the plane of the field of view of the focused specimen. Köhler illumination provides glare-free light utilizing the maximum share of the objective's numerical aperture consistent with good contrast and resolution.

It is important to note, that in these reflected light systems, the objective serves a dual function: on the way down as a matching well-corrected condenser properly aligned; on the way up as an image-forming objective in the customary role of an objective projecting the image-carrying rays toward the eyepiece. In a transmitted light system, changing the objective requires an adjustment in the numerical aperture of the condenser to match that of the new objective. However, in reflected light, the objective and condenser numerical apertures change simultaneously with a new objective. Conjugate planes are similar to those described for transmitted light, with images of the light source being formed in the back focal plane of the objective and within the aperture diaphragm iris opening. This serves to reduce the complexity of establishing the conditions of Köhler illumination in reflected light microscopy.

A function of Köhler illumination (aside from providing evenly dispersed illumination) is to ensure that the objective will be able to deliver excellent resolution and good contrast even if the source of light is a coil filament lamp. The aperture iris diaphragm controls the angle of light striking the specimen from every azimuth in a full cone in brightfield reflected light. The objective's numerical aperture determines the angle of light which can be "captured" as it is reflected from the specimen. Other factors being equal, the higher the numerical aperture, the better the resolution of the objective, i.e. the better the objective is able to clearly separate small details lying close together. The system's vertical illuminator contains the aperture iris diaphragm so that the back of the objective itself does not have to be occluded. 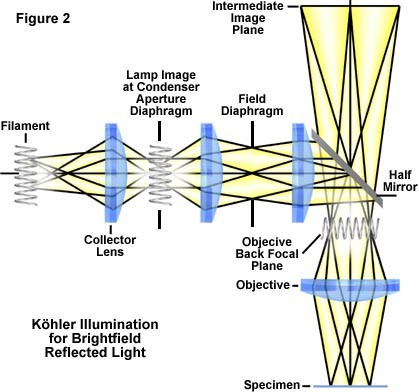 In Köhler illumination, the system is arranged (Figure 2) so that the image of the coil filament of the lamp is brought in o focus at the plane of the aperture iris diaphragm; it is also in focus at the back focal plane of the objective. Assuming there is no frosted filter in the light path of the illuminator, when an eyepiece is removed, the image of the lamp filament can be seen at the back of the objective. In most systems, the lamp housing exterior has a set of centering screws (Figure 3), which enable you to center the lamp filament by moving the filament in a north-south or east-west direction. Also, the closing or opening of the aperture iris diaphragm is observable at the back focal plane of the objective, as described above. 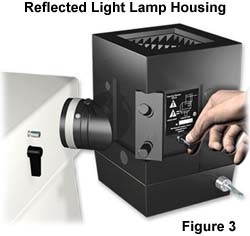 The field iris diaphragm is conjugate (pre-focused) with the focused specimen, the intermediate image plane at the plane of the fixed diaphragm of the eyepiece, and the retina of the eye.

Reflected light microscopy is of growing interest, especially in regard to its increasing usefulness in fluorescence microscopy. The rapidly growing semiconductor industry has also led to an increase in the use of reflected light microscopes, which continue to be very useful in classical applications such as metallography, ore petrography, and materials research.

In practice, the specimen is first focused with a medium magnification objective, usually the 10x, and the aperture of the pre-focused field diaphragm is closed until it is visible in the periphery of the viewfield. If the field iris diaphragm is not centered, the centering screws on the vertical illuminator are used to move a partially closed iris opening in o the center of the field. The diaphragm is then opened until it just disappears from view or from the area delineated by the film frame in a photomicrography reticle. Next, the lamp filament is centered and focused (if this has not been done at the factory), and the aperture diaphragm is set for the optimum specimen contrast and image quality. These steps are discussed in detail in the sections below.

Adjustment of the Reflected Light Microscope
for Köhler Illumination 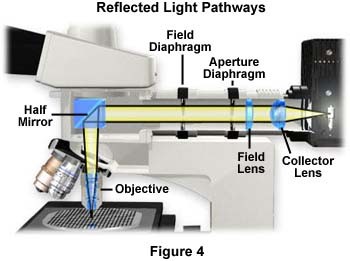 The techniques outlined above for brightfield reflected light microscopy also apply to microscopes equipped for crossed polarization, fluorescence, and differential interference contrast (DIC). In fact, the microscope can be adjusted for Köhler illumination while in any of these modes, and often contrast enhancements can be interchanged without the necessity of realigning the microscope illumination.