l to frequently, sophisticated and well-equipped microscopes fail to yield excellent images due to incorrect use of the light source, which usually leads to inadequate sample illumination. When optimized, illumination of the specimen should be bright, glare-free, and evenly dispersed in the field of view. 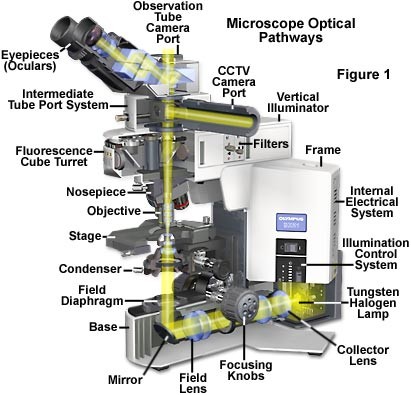 There are numerous light sources available to illuminate microscopes, both for routine observation and critical photomicrography. A most common light source, because of its low cost and long life, is the 50 or 100 watt tungsten halogen lamp as illustrated at the base of the microscope diagram in Figure 1, which also details the optical pathways in a typical modern transmitted light microscope. In this figure, the tungsten-halogen lamp emits a continuous spectrum of light centered at 3200 K (when set at a lamp voltage of +9 volts), which is then passed through a collector and field lens before being reflected in o the substage condenser and onto the specimen. Image forming light rays are captured by the microscope objective and passed either in o the eyepieces or directed by a beamsplitter in o one of several camera ports. Throughout the optical pathway of the microscope, illumination is directed and focused through a series of diaphragms and lenses as it travels from the source to illuminate the specimen and then in o the eyepieces or camera attachment. Alignment of the optical components of a microscope to optimize illumination in modern microscopes is carried out following the rules of Köhler illumination. More details of how both transmitted and reflected light microscopes are aligned for proper Köhler illumination are discussed in our sections on setting up a microscope for transmitted light and reflected light. The optical pathways shown above in Figure 1 are typical for a transmitted light microscope and involve a number of lenses, diaphragms, mirrors, and beamsplitters to direct light through the microscope.

Explore how transmitted light optical pathways are controlled in the microscope.

Tungsten-halogen lamps are relatively bright with a color spectrum centered at 3200 K (when set at approximately +9 volts), but require color conversion filters to raise their color temperature to daylight equivalence. Another popular light source is the 75 to 150 watt xenon lamp because of its very high brightness and long life, a relatively even output across the visual spectrum, and a color temperature which approximates that required by daylight film emulsions. Where very high light intensity is required, tin-halide lamps are often used. In fluorescence microscopy, particular for the purpose of critical photomicrography, 100 watt or 200 watt mercury burners are often employed. In former years, carbon arc lights or zirconium bulbs might have been used, but these sources are seldom seen today. For more information and a detailed discussion of the wide spectrum of lamps available for microscope illumination, visit our section on light sources for microscopy and photomicrography.

Explore how reflected light optical pathways are controlled in the microscope.

In his excellent book "Photography Through the Microscope", John Delly argues that between 80 and 90 percent of all photomicrographs submitted to contests, exhibitions, and scientific publications are victims of improperly aligned optics resulting in poor sample illumination. This is one of the most common problems with microscopy and photomicrography in general, and a surprise examination of the student microscopes in many university laboratories will reveal an abundance of poorly adjusted substage condensers and illumination sources. We suspect that incorrect alignment and adjustment of both the substage condenser and field diaphragm, over the entire range of objectives in a given microscope, are the biggest source of errors in photomicrography.

Afocal or Nonfocused Illumination - Illumination systems that do not form an image of the light source at some point in the optical pathway are called afocal or nonfocused illumination. Before the invention of electric bulbs, microscopists were limited in their choice of suitable sources for microscope illumination. During daylight hours, they could point their microscopes (or substage reflector mirrors) towards the sky and use the clouds as a crude diffusion screen to spread illumination evenly across the entire field of view. Instrument makers also ground mirrors to produce concave reflective surfaces in an effort to increase the light intensity in the object plane. Clouds and blue sky are not light sources that lend themselves to being easily imaged within the optical pathway of the microscope, and thus are sources of afocal illumination. Indoor and night work forced early microscopists to rely on artificial sources of illumination which, due to the inherent lower color temperature produced by these sources, rendered specimen colors in different intensities, hues, and tones than were observed under natural daylight. To compensate for this, microscopists have used various types of blue filters to change the apparent color temperature of artificial light to closely match that of natural daylight. However, without forming an image of the light source somewhere within the optical path, these various early methods of illumination still fall in o the category of afocal or nonfocused illumination.

Early investigations revealed that when rotating between daylight and artificial light sources, there are (practically speaking) no evident changes in the optical character or resolving power of the image, provided the back lens of the objective is completely filled with light. Later, scientists found that the most important requirement is that the numerical aperture of the illumination be at least equal to that of the objective. In the Nineteenth Century, new illumination sources were developed, and a new "source focused" (later termed critical or Nelsonian illumination) method was developed to improve microscope illumination conditions. 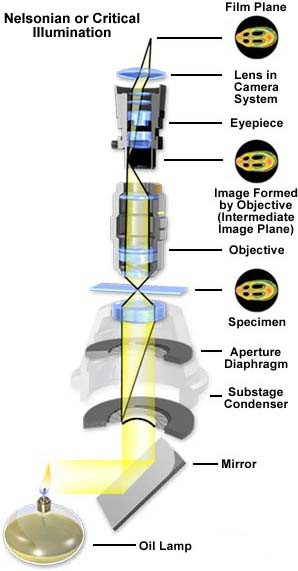 Critical (or Nelsonian) Illumination - This method of microscope illumination was first developed by British microscopist Edward Nelson using optical principles advanced by Ernst Abbe. Nelsonian illumination was used very successfully by microscopists from the latter part of the Nineteenth Century until well in o the Twentieth Century. Today, there are still some advocates of critical illumination who continue to use it with microscopes requiring external light sources, or with cheaper student microscopes where photomicrography is not an issue.

Nelsonian illumination relies on using the substage condenser to produce a focused image of the flame from a burning oil lamp (or other homogeneous light source) in the plane of the specimen to achieve a somewhat even illumination condition over the entire viewfield. Homogeneity of the light source is the important aspect when considering this method of illumination. The flame produced by a burning lamp is fairly even and consistent, but other sources such as frosted enlarger bulbs, opal bulbs, or ribbon filaments can also be used for critical illumination. Figure 2 illustrates the optical pathways of critical illumination using a hypothetical oil lamp that provides a homogeneous illumination source.

Light emitted from the oil lamp flame must be focused by the substage condenser (see Figure 2) so that an image of the flame is produced in the specimen plane at the microslide. In practice, it is often difficult (or impossible) to find focus in the central portion of the flame, so the "edge" of the flame is usually focused with subsequent readjustment of the substage mirror so that the image of the central portion of the flame fills the field of view. The amount of light entering the microscope can be controlled by the field diaphragm, which (if present) is usually attached externally. Enough light must enter the microscope to completely fill the back plane of the objective, and this can be controlled through proper adjustment of the condenser aperture diaphragm. Focusing the light source in the sample plane is precarious and can often yield a grainy, uneven, or speckled background. This can be overcome by slightly defocusing the substage condenser to produce a more uniform background. Nelsonian illumination has largely been supplanted by the far more efficient Köhler method of microscope illumination.

Efficient sample illumination is very dependent upon proper alignment of all the optical components in the microscope, including the illumination source. The serious microscopist should become familiar with the adjustment range of each component and should practice aligning these with different samples and objectives. Uneven illumination can have a serious impact on the quality of photomicrographs, causing "hot spots", vignetting, color fringes, poor contrast, and a variety of other undesirable effects. Some of the newest microscopes are equipped with "pre-centered" lamps that do not allow for adjustment, and some even supply condensers that do not have lateral adjustment mechanisms. It is important to ensure that these microscopes were aligned for proper Köhler illumination at the factory before engaging in photomicrography. Carefully read the microscope instruction manual and/or question your factory technical representative for important details about how these microscopes are optimized for illumination.