In the mid-1950s, a French optics theoretician named Georges Nomarski modified the Wollaston prism used for detecting optical gradients in specimens and converting them in o intensity differences. Today there are several implementations of this design, which are collectively called differential interference contrast (DIC). Living or stained specimens, which often yield poor images when viewed in brightfield illumination, are made clearly visible by optical rather than chemical means. 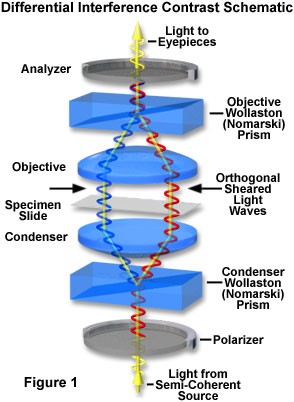 In transmitted light DIC, light from the lamp is passed through a polarizer located beneath the substage condenser, in a manner similar to polarized light microscopy. Next in the light path (but still beneath the condenser) is a modified Wollaston prism that splits the entering beam of polarized light in o two beams traveling in slightly different directions. The Wollaston prism is composed of two quartz wedges cemented together, from which emerging light rays vibrate at 90 degrees relative to each other with a slight path difference. A different Wollaston prism is needed for each objective of different magnification. Wollaston prisms are usually loaded in o a revolving turret on the condenser, which allows the microscopist to rotate the appropriate prism in o the light path when changing magnifications.

The plane-polarized light, vibrating only in one direction (East-West) perpendicular to the propagation direction of the light beam, enters the beam-splitting modified Wollaston prism and is split in o two rays, vibrating perpendicular to each other. These two rays travel close together but in slightly different directions (see Figure 2). The rays intersect at the front focal plane of the condenser, where they pass traveling parallel and extremely close together with a slight path difference, but they are vibrating perpendicular to each other and are therefore unable to cause interference. The distance between the rays, called the shear, is so minute that it is less than the resolving ability of the objective. 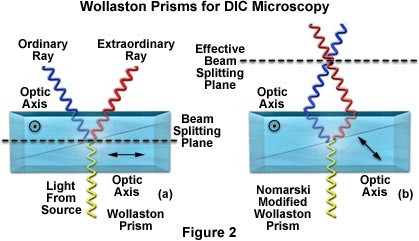 The split beams enter and pass through the specimen where their wave paths are altered in accordance with the specimen's varying thickness, slopes, and refractive indices. These variations cause alterations in the wave path of both beams passing through areas of any specimen details lying close together. When the parallel beams enter the objective, they are focused above the rear focal plane where they enter a second modified Wollaston prism that combines the two beams at a defined distance outside of the prism itself. This removes the shear and the original path difference between the beam pairs. As a result of having traversed the specimen, the paths of the parallel beams are not of the same length (optical path difference) for differing areas of the specimen.

In order for the beams to interfere, the vibrations of the beams of different path length must be brought in o the same plane and axis. This is accomplished by placing a second polarizer (analyzer) above the upper Wollaston beam-combining prism. The light then proceeds toward the eyepiece where it can be observed as differences in intensity and color. The design results in one side of a detail appearing bright (or possibly in color) while the other side appears darker (or another color). This shadow effect bestows a pseudo three-dimensional appearance to the specimen.

In some microscopes, the upper modified Wollaston prism is combined in a single fitting with the analyzer incorporated above it. The upper prism may also be arranged so it can be moved horizontally. This allows for varying optical path differences by moving the prism, providing the user a mechanism to alter the brightness and color of the background and specimen. Because of the prism design and placements, the background will be homogeneous for whatever color has been selcted.

The color and/or light intensity effects shown in the image are related especially to the rate of change in refractive index, specimen thickness, or both. Orientation of the specimen can have pronounced effect on the relief-like appearance and often, rotation of the specimen by 180 degrees changes a hill in o a valley or visa versa. The three-dimensional appearance is not a representation of the true geometric nature of the specimen, but is an exaggeration based on optical thickness. It is not suitable for accurate measurement of actual heights and depths. 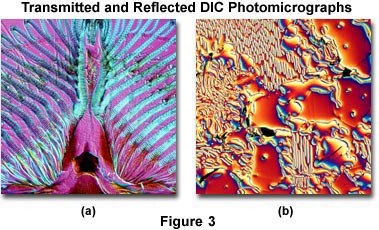 There are numerous advantages in DIC microscopy as compared to phase contrast microscopy. With DIC, it is possible to make fuller use of the numerical aperture of the system and to provide optical staining (color). DIC also allows the microscope to achieve excellent resolution. Use of full objective aperture enables the microscopist to focus on a thin plane section of a thick specimen without confusing images from above or below the plane. Annoying halos, often encountered in phase contrast, are absent in DIC images, and suitable achromat and fluorite objectives can be used for this work.

A downside is that plastic tissue culture vessels and other birefringent specimens yield confusing images in DIC, hence Hoffman modulation contrast is recommended for tissue culture work. Also, high-quality apochromatic objectives are now designed to be suitable for DIC. Figure 3 presents transmitted and reflected light DIC photomicrographs of the mouthparts of a blowfly (transmitted DIC; Figure 3(a)) and surface defects in a ferro-silicate alloy (reflected DIC; Figure 3(b)). Both photomicrographs were made using a retardation plate with a 10x objective.

The DIC condenser contains four or more prisms, a brightfield opening with aperture diaphragm for regular brightfield work, and/or several light annuli. The light annuli, together with phase objectives, enable the microscopist to make quick comparisons between phase contrast and DIC images. A rotatable polarizer is fitted below the prisms. Use of full objective aperture enables focusing on a thin plane section of a thick specimen without confusing images from above or below the plane that is being focused on; this is called Optical Sectioning. Larger apertures also yield better resolution in optical microscopy. 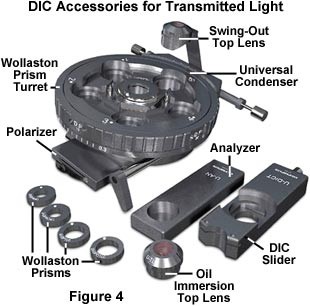 The color and/or light intensity effects shown in the image are related especially to the rate of change in refractive index, thickness or both in details or adjacent areas of the specimen. The image appears 3-dimensional. This appearance does not represent the true geometric nature of the specimen, but is an exaggeration based on optical thickness, and is not suitable for accurate measurement of actual heights and depths. Optical thickness refers to changes in the light path resulting from change in refractive index or actual thickness or some combination of both of these variables.

As mentioned above, at the gray setting of the movable upper prism, the 3-dimensionality is most marked. Orientation of the specimen can significantly improve the relief-like appearance. Sometimes the rotation of the specimen 180 degrees changes a hill in o a valley or vice versa; hence the interpretation of the image must be done with caution. The darker appearance on one side and the lighter appearance on the other side of a detail greatly improve the visibility by giving a pseudo-relief effect.

To configure a microscope for DIC contrast enhancement, the following steps should be considered:

These are numerous advantages in DIC microscopy as compared particularly to phase microscopy:

There are several disadvantages or limitations in DIC:

Once again, like so many of the contrasting enhancing techniques, we find that manipulation of light at the front focal plane of the condenser and at the rear focal plane of the objective has significant effect upon the appearance of the image that is visualized through the eyepiece.