Anatomy of a Microscope - Field Curvature

Curvature of field in optical microscopy is an aberration that is familiar to most experienced microscopists. This artifact is the natural result of using lenses that have curved surfaces. When visible light is focused through a curved lens, the image plane produced by the lens will be curved as illustrated in Figure 1. Notice that there are two curved planes that we have labeled A and B. 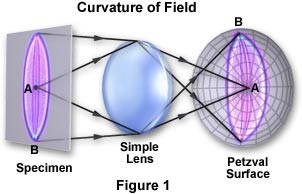 The image can be focused over the range between A and B to produce either a sharp focus on the edges or in the center. When the image is viewed in the eyepieces (oculars) of a microscope, it either appears sharp and crisp in the center or on the edges of the viewfield but not both. Normally, this is not a serious problem when the microscopist is routinely scanning samples to observe their various features. It is a simple matter to use the fine focus knob to correct small deficiencies in specimen focus. However, for photomicrography, field curvature can be a serious problem, especially when a portion of the photomicrograph is out of focus.

This concept is illustrated in Figure 2 using photomicrographs of a stained thin section of an elephant toe bone. The upper image (a) in Figure 2 shows the thin section with only the edges in focus. Notice that the central portion of the image is very blurred and it is not possible to distinguish any minor structural details present in the specimen. The bottom image (c) in Figure 2 shows the section with the central portion of the viewfield in focus and the edges blurred. This would be the focus that a microscopist would be forced to use for photomicrography with optics in this state. Figure 2 (b) illustrates the case of an objective that has been corrected for curvature of field aberrations. This objective is the obvious choice for optimum results in photomicrography.

As we have mentioned before, curvature of field can be tolerated when just scanning samples, but it is disastrous when one is trying to produce quality photomicrographs. In the early days of microscopy before corrected lenses were enjoying widespread use, photomicrographers would often restrict the area recorded on film to the focused central area of the view field, thus obscuring the blurred edges. This can be easily accomplished by insrting a projection lens in the phototube to reduce the amount of viewfield available for the camera. Another method is to use a bellows extension on the camera to increase the camera film distance until only the central portion of the viewfield is visible.

Modern microscopes deal with field curvature by correcting this aberration using specially designed flat-field objectives. These specially-corrected objectives have been named plan or plano and are the most common type of objective in use today. Plan objectives are also corrected for other optical artifacts such as spherical and chromatic aberrations. In the case of a plan objective that also has been mostly corrected for chromatic aberration, the objective is referred to as a plan achromat. This is also the case for fluorite and apochromatic objectives, which have the modified names: plan fluorite and plan apochromat. 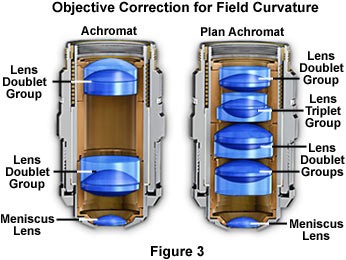 Sophisticated plan apochromatic objectives that correct for spherical, chromatic, and field curvature aberrations can contain as many as eighteen to twenty separate lens elements, making these objectives the most expensive and difficult to manufacture. Plan apochromatic objectives can cost upward of $3,000 to $4,000 each for high-magnification units that also have a high numerical aperture. For most photomicrography applications, however, it is not absolutely necessary to have the best correction, although this is heavily dependent upon the specimen and the desired magnification range. When cost is important (when isn't it?), it is often wise to selct more modestly priced plan fluorite objectives that have a high degree of correction, especially the more modern versions. These objectives provide crisp and sharp images with minimal field curvature, and will be sufficient for over 90 percent of photomicrography applications.

Field curvature is very seldom totally eliminated, but it is often difficult to detect edge curvature with most plan-corrected objectives and it does not show up in photomicrographs. This artifact is more severe at low magnifications and can be a real problem with stereo microscopes. Manufacturers have struggled for years to eliminate field curvature in the large objectives found in stereo microscopes. In the past ten years companies like Nikon, Olympus, Zeiss, and Leica have made great strides in the quality of optics used to build stereo microscopes and, while the artifacts and aberrations have not been totally eliminated, the high-end models are now capable of producing superb photomicrographs.