All microscopes are designed to include a stage where the specimen (usually mounted onto a glass slide) is placed for observation. Stages are often equipped with a mechanical device that holds the specimen slide in place and can smoothly translate the slide back and forth as well as from side to side. A stage can be classified according to design and functionality. In the simplest case, the plain stage (illustrated in Figure 2, on the left) consists of a rectangular or square design containing several clips to hold the specimen slide. 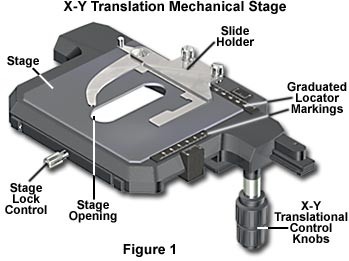 The stage illustrated in Figure 1 is a typical rectangular stage with the added feature of a specimen slide translational control device commonly referred to as a mechanical stage. This mechanical stage contains controls for right-handed microscopists that allow the movement of the specimen slide in both the X (right and left) and Y (back and forth) directions so the microscopist can examine the entire microscope slide (secured to the stage with the slide holder). Similar mechanical stages are available with the translational control knobs situated on the left-hand side of the stage for left-handed microscopists. The stage illustrated in Figure 1 also contains a rather large opening in the center to allow light from the condenser to pass through the specimen (the stage opening). The stage is also equipped with a locking control that allows the stage to be fixed in o position with respect to its rotation around the condenser axis. Graduated locator marks positioned on the mechanical portion of the stage allow the microscopist to note the location of important specimen details, allowing easy return to the area for additional observation or photomicrography. A simple (commonly termed "plain") microscope stage is illustrated on the left in Figure 2. This stage contains an opening to admit light from the condenser, several mounting holes for a mechanical stage, and two clips that secure the specimen slide in place for observation under increasing magnification (changing of objectives) and for photomicrography. The stage is also equipped with a locking control that can fix the position of the stage. This stage is very useful for quick examination of specimens, but is very difficult to use with higher power objectives (above 20X). At high magnification, small translations of the specimen slide will usually throw the features of interest completely out of the viewfield, and attempting to relocate them can lead to frustration. Auxiliary mechanical stages attached to a simple stage can allow for minute translation of the specimen slide, making it easier for the microscopist to find specific areas on the slide. The mechanical stage attachment illustrated on the right in Figure 2 can be easily attached to the simple stage on the left in the same figure. In order to attach this mechanical stage, the specimen clips must first be removed. The circular graduated stage, illustrated on the left in Figure 3, is one of the most versatile and useful designs for all types of microscopy and photomicrography. These stages rotate 360°, permitting complete rotation of the samples and great ease in fine-tuning the composition of viewfields for photomicrography. An added feature is the graduations included on the periphery of the stage, which allow for precise alignment when critical analytical measurements must be undertaken. The stage rotates on ball bearings that provide precision rotation without annoying jerks, bumps, and stalls. Two centering knobs (Figure 3) permit the stage to be centered with respect to the optical axis of the microscope. When used with objectives in a centering nosepiece, the microscope can be adjusted to be parcentric, meaning that a specimen centered in the field of view for one objective remains centered when the nosepiece is rotated to bring another objective in o use.

Modern microscope stages are precisely manufactured and very durable. They are cast from either iron or aluminum and machine-finished to accurate tolerances. Translation mechanisms are usually rack-and-pinion styles, machined from aluminum, brass, or (more recently) synthetic polymers. The synthetic gear mechanisms usually are far less durable than their metal counterparts, especially after years of use. These devices should be thoroughly cleaned, lubricated, and tightened for adjustment every several years. Most stages are protected with a very tough non-glossy ceramic coating that resists marks and scratches. The dull surface ensures that stray light is not reflected from the stage in o the objective.

Specialized Microscope Stages - There are a wide variety of microscope stages that are designed for specific purposes. These include stages equipped with auxiliary equipment for manipulating samples during observation, measuring systems that allow precise measurements to be made over very small distances, universal stages that allow measurements over many specimen angles, and other specialized stages that perform a myriad of unique functions. We will discuss some of the more common specialized microscope stages below. 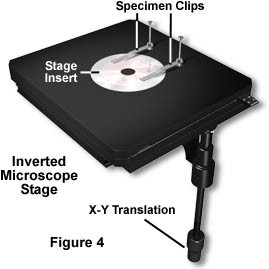 The inverted microscope stage is similar in its basic overall design to the mechanical stage illustrated in Figure 1. Both stages have translational controls that allow the stage (and specimen) to be moved in both the X and Y directions. The main difference is the large stage opening that accommodates an insrt on the inverted microscope stage. The insrts (Figure 4) are usually made of stainless steel and have openings of various sizes to allow for large differences in sample size. For instance, with inverted tissue culture microscopes, researchers often must scan large culture flasks to observe the entire population of cells and this is much easier to accomplish when the stage insrt has a large opening. Metallography samples are also often quite large and more of their surface can be observed with the specialized insrts. When small specimens are to be observed, an insrt with a very small opening (about the size of the one in Figure 4) is used to support the sample for observation. Inverted microscope stages do not translate up and down. Focusing is accomplished using a translatable nosepiece that, together with the objectives, moves up and down.

High-Magnification Measuring Systems - Quantitative microscopy often demands highly accurate measurements of various specimen dimensions. These include measurement of miniature precision parts and semiconductors as well as high-precision assembly of magnetic heads and other minute electronic components. Specialized microscopes with precision stages are often used for these purposes. The stage illustrated in Figure 5 is an example of a precision microsope stage. It is equipped with a micrometer-style translational apparatus that allows for very accurate and controlled movements of the stage and specimen. The stage is also rotatable over the entire 360° range for total control over the measurements. 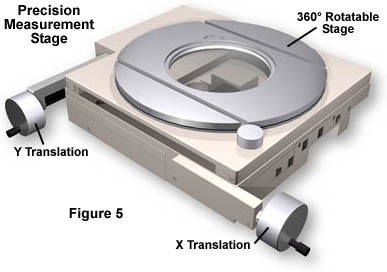 Microscopes designed for stages of this type are sometimes equipped with prisms for Erect Image Observation, meaning that the observed image and the specimen both move in the same direction (the opposite is true for most microscopes). The stages are usually accompanied by electronic controllers that give accurate digital readouts of the stage position, and most can be programmed for precise stage movements in a sequence of steps. There are a wide variety of designs for these specialized stages and many aftermarket manufacturers are capable of supplying custom-configured stages built to the customer's specifications.

Micromanipulators - It is often necessary to manipulate the specimen while it is being observed under the microscope. This is the case in many tissue culture and in vitrofertilization experiments as well as genetic implantation procedures that require close observation of the sample during the experiment. The micromanipulator stage illustrated in Figure 6 is an example of the type of equipment necessary to conduct these types of operations. 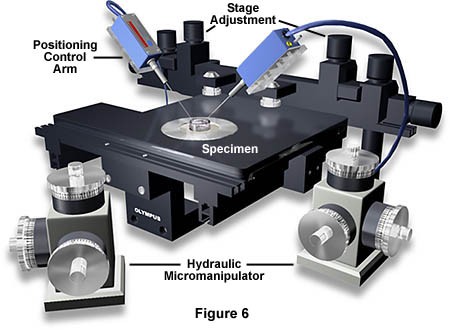 This specialized stage has two triple-axis hydraulically controlled water micromanipulators that orchestrate specimen handling in a highly accurate manner. In the illustration, a small petri dish containing embryos is being manipulated with the control arms to monitor pH of the solution as well as providing radioactively labeled nutrients to the embryos. These manipulators can be adjusted to perform a wide spectrum of functions ranging from microinjection to electrochemistry experiments. There are a number of manufacturers who supply micromanipulators and accessories that attach to commercial microscopes such as those manufactured by Olympus and Nikon.

Universal Stage - This unwieldly looking microscope stage permits tilting of a thin specimen at any angle for measuring the optical structure of a birefringent crystal. The universal stage illustrated in Figure 7 is an example of this type of stage.

Universal stages are designed to be used with special long working distance (LWD) objectives and very low magnifications usually ranging from 5X to 20X. These stages are graduated on all 4 axes with rotation scales that are distinguished by different color codes. The four rotating centers of the main body all rest on a common point. Two hemispherical lenses are used to sandwich the specimen between their plane surfaces with immersion oil being applied to all contact surfaces.

There are a variety of other specialized microscope stages that we have not covered in this discussion. Rapid growth in the semiconductor arena has led to the design and manufacture of a number of stages utilized to examine and manipulate integrated circuit wafers. Similar microscopes have also been adapted in other areas of integrated circuit manufacture. Many scientists design and build their own custom stages for specific experiments including biomedical investigations, cell manipulation, materials research, and geology.